Somewhere along the way, people confused mere emotion for inspiration. Some people’s prejudices notwithstanding, religious inspiration is not inevitably spasmatic. Neither are the ecstatic eruptions of a prophet more ethereal than the last draft of an apostle’s letter. In fact, one cannot regularly read the Bible without eventually conceding that many of its portions were very carefully crafted by their writers. This does not diminish their authority at all; it means that we must read carefully, giving attention to the words as they are given to us. The way that a text is written guides the way that it must be read. Scripture is so written as to be understood, but it can only be understood according to the manner that it is written.

Luke’s two letters—the gospel that bears his name, as well as The Acts of the Apostles—are testimony to this. The themes that frequently reoccur in his writings recall and depend upon portions of the Old Testament. The Old Testament passages help the reader to understand what is taking place in the New Testament. The second chapter of Acts is just such a place. There, Luke records Peter’s sermon on the day of Pentecost, but Peter’s sermon recalls Old Testament scripture.

Obviously, this second chapter consists of several parts. Its early verses apparently recall the giving of the Law to Moses on Mount Sinai. Their association is never stated expressly, but the images and circumstances of Mount Sinai closely correspond to what occurs in Jerusalem on Pentecost day. For one, fire was central to Moses’ visit to Sinai, even as it also appears early in the Pentecost story.1In Exodus 19:16-20 we read how the LORD descended upon Sinai in fire. Thunder and lightening accompany him. The reader will also find it instructive that Elijah’s later visit to Sinai is also accompanied by wind, earthquake, fire, and God’s word (1 Kings 19:9-15), which means the Exodus and 1 Kings texts must also be considered together. The Lord had descended upon Mount Sinai in fire (Exodus 19:18), initiating a series of events, culminating with Moses’ decent from the mountain with the word of God for the people below—the Law written on tables of stone.

Moses’ descent—what should have been a blessing for the people—is then interrupted by the idolatrous disobedience of Israel. The cursing of the Law then ensues: Three thousand men die for their sin on that day, for they had transgressed the covenant word (Exodus 20:1-7, Exodus 32:28). When the Spirit descends on the day of Pentecost, however, three thousand people repent at the preaching of Peter. The contrast is ours to see: Like Moses, Peter had also spoken the word of God to the people below; but the effect was now different, chiefly because the word was different. Peter proclaimed “the wonderful works of God” (Acts 2:11).

Those in Jerusalem are accordingly saved by faith in the Savior, who fulfilled the Law that Israel had disobeyed. Moses had ascended Mount Sinai to bring the Law below to the people, but the Lord Jesus—the obedient Son—ascended to the very presence of his father in heaven (Acts 1:9). The heavenly Jerusalem is hereby made the suitable contrast to Sinai, even as Paul also writes to the Galatians (Galatians 4:24-26). After all, the ascended Lord Jesus ascended to the heavenlies and sent the Spirit to those waiting below in the earthly Jerusalem (cf. John 16:7; Acts 1:4, 12-14).

The apparent contrast between the giving of the Law from Sinai and the decent of the Spirit on Pentecost properly belongs to another article; still, that evident contrast sets the stage for what later transpires on that Pentecost day. Therein, too, another Old Testament event is recalled: the judgement of the nations at Babel (Genesis 11:1-9).

Genesis 11 represents a very important point in redemptive history. Adam’s disobedience in the garden possesses many points of notable correlation, and one of them is Babel. In Babel, too, the reader observes man’s religious aspirations apart from his creator. Significantly, those aspirations take the form of him constructing a city and tower (Genesis 11:4). If Eden was the earthly antecedent of a heavenly city,2See other posts, A  Mountain Sanctuary and A Prelude to Eternity. Babel was man’s effort to build a city and temple himself, one that reached the heavens apart from God. Its designs to both reach toward heaven and obtain a name for its builders expose its optimistic and religious character. It became sinful because its builders made their own efforts and hopes the object of their optimism.

We are not told why the people who journey west stopped in the land of Shinar, but we are told that they soon purposed to build a city and a tower there. And, more to the point, we are also told why they decided to build heavenward. In so many words, Genesis 11:4 tells us they feared that they would be scattered from one another. Indeed, they were ambitious to ascend high unto the heavens, for that is the religious impulse of all people; but it also possible that the memory of the flood still haunted them, and that in building tall, they thought they had conceived a sufficient plan against God’s future judgement. Of course, the occasional bow in the sky was a pledge that God would not again destroy the whole earth by flood (Genesis 9:13-16), but the pledges of the Almighty are of little comfort to those who refuse them. Hoping to avoid one kind of judgement, they fall to another. God then confounds language of the builders, and they are scattered to inhabit the farther corners of the earth. God had judged them by confounding their words.

In this way, the nations are judged, but after they are scattered, the LORD then calls a man by the name of Abram (Abraham). Abraham will eventually receive a promise, and his seed will become the means by which the nations will be blessed (Genesis 12:3).

Those in Babel had searched for confidence in their own name and by their collective power. Human effort there found its sinful expression when it became disjoined from the glory of God, where it became the answer to human fear and weakness. In Babel the unbelievers asserted power when they felt weakness; it is therefore striking that the apostles, huddled among themselves in weakness and fear after the death of their savior (John 20:19), would receive power and its attending courage on the day of Pentecost (Acts 1:8). But that power would be given by God, effecting the building of a city whose builder and maker is God (Hebrews 11:10).

But in considering the relationship between God’s judgement at Babel to the day of Pentecost, it is important to briefly state what was not happening that day. Here, I refer to the erroneous teaching of some Charismatic Christians, who teach that Acts 2 records the speaking of tongues as a necessary evidence that one is filled by the Spirit. It is also not uncommon to hear from some of these same people that the gift is demonstrated by speaking in incomprehensible sounds. It is apparent from Acts 2:6-11, of course, that the those temporarily gathered in Jerusalem heard the apostles speak in the languages of their native lands—languages understood by the audience. To teach that the apostles spoke in unintelligible tongues is clearly an error. That said, their error disguises the true glory of that day. For whatever reason, some of them seem convinced that the unusual way that the apostles spoke that day is more important and more glorious than what they said. And this is precisely the problem. They glory in the outward appearance of things. They exalt the miracle (tongues) at the expense of the message (the gospel), and thereby conceal the greater miracle—the new birth.

Indeed, on that Pentecost day the apostles addressed their audience by way of a miracle. They stood and preached in languages that they, themselves, did not understand; and yet, those languages were understood among those in the crowd. That said, it is also important to note that the Pentecost miracle did not reverse the judgement and curse of Babel. In other words, both before and after Pentecost, a diversity of language remained, all because of God’s former judgement at Babel. Too often, the focus of this debate is on the tongues themselves; but the reader should see that another kind of “language” is central to this story. The Babel judgement is not reversed; instead, there is, instead, a reappropriation of language to create a new people by the gospel. The greatest demonstration of the Spirit’s power that day was the conversion of 3,000 people that Moses’ Law could not have effected, but the gospel did just that. To misrepresent the miracle of Pentecost day is also to dilute its redemptive significance.

At Pentecost, the LORD did not intend to return the nations to their former situation. The Spirit was given so that there would be no return to the false unity of Babel—or, even, to the best that preceded it; instead, the LORD created a new people with unity and affections founded in the ascended Savior. The gospel was the announcement of a new word—a new language, if you will. People everywhere—people of every nation—were to hear in their own tongue the “wonderful works of God.”

At Babel, the LORD scattered the one people by confounding a single language into many; but in Jerusalem, the many languages heard that day never became one again. Instead, the many people who believed the gospel were made one new people, who are supposed to speak that new gospel language, whatever their national language. The LORD had descended uninvited unto the plains of Shinar to confuse the nations (Genesis 11:7); now the Spirit descended uninvited into the very city where the savior had been slain. They are not scattered, but they are united and reconstituted in a surprising and unprecedented way when they believe. In their own languages they hear the wonderful works of God. They hear the gospel: and that is the word—the new language—that unites the scattered nations into the church. That is also the word that Christians now should speak.

The gospel—the record of the redemptive work of God in Christ—became the new language that made a new people, the church (Ephesians 2:14-22).3In fact, if we take Zechariah 8:23 to be prophetic of the Millennial age, it is interesting that a diversity of language remains. there we see that a distinction of languages remains. Zephaniah 3:9 might then also refer to the way that that the gospel purifies and redirects speech unto the service of God. When the audience saw and heard all that was said that Pentecost, some were amazed, while others mocked the apostles (Acts 2:13-14). The gospel still sounds strange to some—even like babble; but that Spirit-given-word is building a city. Shinar’s city was built of brick and mud; New Jerusalem is made of living stones (1 Peter 2:5).

Man builds his cities, and the Lord builds his own. He will live among his people, and be their God (Revelation 21:3). That people becomes the city, where the redeemed glorify their Savior (Revelation 21:9-10). He thereby gets himself a name. Man exalt themselves, but our Lord got himself a name by his gracious and humble work of redemption (Nehemiah 9:10, Philippians 2:5-11).

Image:  A mosaic of Pentecost | Courtesy of Pixabay . 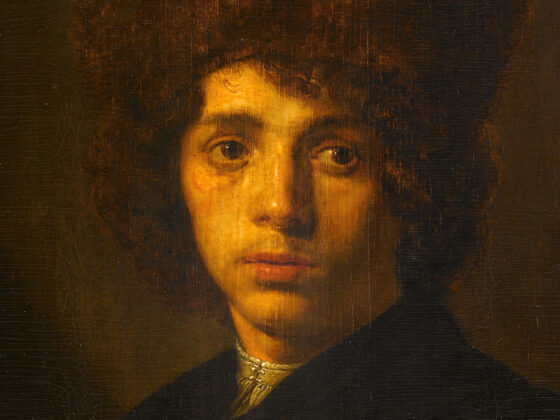 Paul Writes to the Romans