Some have helpfully reminded their readers that the Millennium is the goal of history,1Feinberg quotes Ryrie in saying that the goal of history is the earthly millennium. It is a goal of history within time. See Charles L. Feinberg, Millennialism: The Two Major Views, Third Edition ed. (Winona Lake, IN: BMH Books), 77. for so it became. From the moment that Adam sinned in time, salvation would be mediated through covenants, all of which were inaugurated in time. Those same covenants are now the record of history; and yet, some of us are persuaded that their fullest expression is still yet to come. The Lord Jesus is the seed, subject, and fulfillment of those covenants, but some of them find their complete expression in the Millennium.

This is, of course, a point of disagreement between Christians. The breadth and substance of those disagreements will not be considered here. Entire books have not settled those disagreements, though that fact does not mean that the debate should end. For now, there is something that can be said, for though the Millennium is the goal of history, it cannot be best-considered in those terms only. It is also the prelude to eternity.

When Revelation 20:1-10 speaks of the 1,000-year reign of the Lord Jesus Christ, it certainly bears a direct relation to covenant promises given to Abraham and David (Genesis 15:1-18; 2 Samuel 7:12-16, Psalm 89). At that time, the Lord Jesus will return to the earth, establishing rule from Jerusalem. That said, his reign will answer to more than these covenants. The Jewish prophets are not the only voices in scripture’s chorus. In other words, the Millennium answers to something more than prophecy: It is the recasting of characters for a repeated but final drama. History will then be revisited so that eternity may proceed. The Millennium, in the end, actually bears a parallel to Eden.

It is true that the Old Testament prophecies invest the Millennium with a greater appeal than the present age; and yet, the same prophecies—not to mention Revelation 20 itself—also predict an alarming set of circumstances and events. Sin, rebellion, and death will again interrupt life in that age. Some debates regarding the Millennium stem from just this fact. It is inconceivable to some Amillennialists how such a scenario might fit into the Bible’s scheme for the future. It makes no sense to them that only a relative bliss will precede a fuller and consummated bliss. This is, to be fair, a generalization of a kind, for Amillennialists have more objections to Millenarianism than this one; and yet, the objection has been made.2Again, see Feinberg for a brief discussion (ibid., 318).

Regardless, this order of events is not antithetical to Paul’s view of history. In writing to the Corinthians, Paul predicts a time when Christ will deliver the kingdom of God to the Father (1 Corinthians 15:22-28). Some might read verses 23 and 24 as describing how that Christ will deliver his kingdom to the Father immediately after his coming and its associated resurrection, as if there is no room for a 1,000-year reign in Jerusalem in the various events listed; but verses 1 Corinthians 15:24-26 do speak about a rule in which all authority is brought under the Savior’s feet. Most notably, the Lord must reign until death is also destroyed. In its fullest consideration that reign can not be made to correspond to the current state of affairs. Indeed, some Dispensationalists may have misconceived and misstated certain aspects of the kingdom of God, but that fact does not take away the rather obvious prediction of a future millennial kingdom, which continues over the course of 1,000 years. Associated with that fact are the plain statements in Revelation 20, that a resurrection precedes and follows the Millennium.

The language in 1 Corinthians 15:24 bears some resemblance to that in Hebrews 2:8. They both speak to the quality and extent of Christ’s rule. The Hebrews passage is especially important, for it reminds us that man’s Edenic mandate is never properly exercised until Jesus Christ himself brings all into subjection under his feet. Given the fact of the Fall, man finds his intended place only in Christ’s economy and rule.

The millennial reign, then, also answers to the situation first presented in the garden of Eden.3There is an irony here, for the Amillennialists will reject my application of Eden to the Millennium; and yet, some of Amillennialists have been very helpful proponents of a kind of protology in Genesis, where its “first things” effects eschatology and its “last things.” Accordingly, Geerhardus Vos is remembered for the helpful maxim, eschatology precedes soteriology. His insight remains indispensable: “Man is reminded in this way that life is not an aimless existence, that a goal lies beyond. This was true before and apart from, redemption. The eschatological is an older strand in revelation than the soteric” (Vos, Biblical Theology: Old and New Testaments, The Banner of Truth Trust, 140). At that time, too, there was the expectation of a better age to come. Adam was endowed with privilege and responsibility, but there was more than that held out to him. His nakedness suggested the possibility of clothing and the presence of the Tree of Life suggested that he might eat of it. In short, the order and circumstances of the garden suggested a fuller and more frequent intimacy than Adam knew at that time.4See a previous post, A Mountain Sanctuary. A good age suggested a better age to come.

Accordingly, the Millennium may very well serve to approximate the past circumstances of Eden in a future Jerusalem. At that future point in time, man will enjoy the greatest freedom and pleasure since the Edenic period. Nevertheless, Adam will not keep that garden, for that privilege and responsibility will belong to the Last Adam (1 Corinthians 15:45). When the devil is then loosed from his prison at the end of that age (Revelation 20:3, 7), he merely reattempts what he first accomplished in the garden of Eden in the form of the serpent, the overthrow of righteousness by deception. Revelation 20:8 records that the devil will then deceive the nations that are under Christ’s rule. As Eve was first deceived, so will be the nations deceived (Genesis 3:13, 1 Timothy 2:14; Revelation 20:8).

This future deception will again present a disruption between God and man; but at the coming juncture, the Last Adam will destroy the serpent who enters that garden world—an apt description of the Millennium, given Isaiah’s prophecy (Isaiah 65:17-25). History is thereby brought to its fullest resolution, for the Lord himself—the Son of God5The Lord’s title as the Son of man recalls his role in the rule of God on the earth. One might think of the Matthew’s gospel here, but also Daniel 7:13-14. Unsurprisingly, then, the Millennium is associated with that description of the Savior; but insofar as the Son of man is also the Son of God, the reader is also caused to remember this description that is common to both Adam and the Lord Jesus (Luke 3:38, Matthew 1:1). Importantly, the Millennium has that reference point, too—one that precedes from the first pages of scripture.—will have then completely finished what the first Adam left undone. He will destroy the devil who succeeds by deception. Sin and death entered the garden of Eden behind the serpent, but they are forever vanquished when the devil is removed from the millennial garden. Accordingly, the integrity of man is forever confirmed in Christ, and the hopelessness of man without Christ is likewise confirmed. Only then may history yield to eternity.

Image:  Detail of "A Gorge in the Mountains (Kauterskill Clove)" by Sanford Robinson Gifford, 1862 | The Metropolitan Museum of Art, New York City | Bequest of Maria DeWitt Jesup, from the collection of her husband, Morris K. Jesup, 1914 . 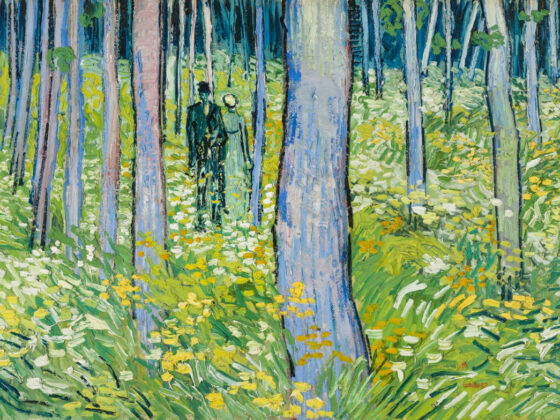 The Spirit Blows on Some but not Others