This is introductory to another post about the Rich Man and Lazarus.

It is a striking thought that Jesus’ every earthly utterance belonged to God. To be clear, Jesus Christ also spoke these same words as a man, and it is the fact that Jesus simultaneously spoke as both God and man that remains a cause of wonder. After all, a man might say something like, “I thirst” (John 19:28) with little attending surprise, but when God speaks such words in the form of a man—one who was then hanging on a cross to die, the same words take on another marvel and character altogether. They become part of the very way in which God has revealed himself through his Son.

And yet, it is also true that by such words our Jesus’ words were distinct from those of the Father. The man Jesus was ever God1The Father and Son, different persons of the Godhead, spoke in distinction from one another. Their persons are distinguished; and yet, the Lord Jesus frequently reemployed the same words as the Father when he spoke. This demonstrates both the diversity and unity in the Godhead. and spoke God’s words; and yet, the Son is ever distinct from his Father. Jesus Christ, accordingly, speaks as the Son whenever he speaks; he never speaks as the Father. This is indirectly comprehended in the well-known pronouncement, “the Word was made flesh, and dwelt among us” (John 1:14). God the Father spoke by his Son, even as the Son spoke to men in the flesh. The Father relayed his last and final redemptive word to men by the eternal Word, who is the Son of God (Hebrews 1:1-2).

That said, Jesus’ every word was not included in scripture. This is, of course, but to state the obvious: there were many things that Jesus said that are not recorded in the pages of the Bible.2John 21:25 carries this same idea forward in reference to the acts of God. This may well invite the reader’s curiosity: Why are some details given and others withheld? For example, we know comparatively little about the boy Jesus—the extraordinary scene in the temple, notwithstanding,3Luke 2:43-50 but we are given astonishingly deep glimpses into the humanity of the man who died on the cross—even into his inner disposition while crucified (cf. Matthew 27:46). In other words, we might not have chosen the scenes that are placed in the pages of scripture; nevertheless, there are only certain scenes that establish the composition of scripture. We might have included more or fewer scenes than are given, but whatever scenes are included are neither incidental nor insufficient.

This, then, brings us to another distinction, still—this time between Jesus’ many words that were included in revelation and the others that were not. This, in turn, leads Christians to consider the work of the Spirit in revelation—his role in inspiring certain words which he made belong to the record of revelation, over and against those he did not. We have the words we do, not merely because they were spoken by God, but because the Spirit preserved those particular words in the record of revelation and not others.

Inspiration is God’s work—it is the Spirit’s work (2 Timothy 3:16, 2 Peter 1:21). The choice words of the Father and the Son (together with the words and acts of chosen people) are employed and preserved in writing by the Spirit himself. Indeed, scripture—much like the original creation of the world—is a work of the Trinity to serve the revelatory purposes of God:4Genesis 1:1-2, John 1:3, Psalm 19:1, etc. The Spirit inspired scripture to reveal the Son (John 16:13-15), and the Son reveals the Father (John 1:18). The words and deeds of the Father and the Son are therefore objectively related to men by the Spirit’s inspiration, contained in writing. Importantly, this is in a reverse order than what I highlighted above, but still confirms the very same order. It is not merely that the Father sent the Son and the Spirit to an arbitrary end,51 John 4:14, John 15:26, etc. The reader will note that John 15:26 reads that both the Father and Son have a share in sending the Spirit. Some readers will know that this became the subject of a large controversy among some professing Christians in the first millennium A.D., referred to as Filioque controversy. but when this procession was finally realized, it was so that benighted men might know the Father. The Spirit speaks of the Son, who in turns reveals the Father.62 Corinthians 4:6 One cannot know the Father without the Son, but he positively knows the Father through the Son (Matthew 11:27). God’s revelation in history is a symphony of the Godhead, so that God might eventually be all in all (1 Corinthians 15:28).

Put another way, scripture obtains particular and objective uses by the inspiration of the Spirit. The Spirit has governed the content of scripture. Such is his work in the Trinitarian task of verbal revelation. When certain words are preserved instead of others, it is so that God’s revelation and purposes might be obtained by those very words; and yet, those words are ordered in the forms that God gives. Indeed, God’s intentions have always controlled the content and form of revelation, and the content and form of God’s words reveals and creates history.

This means, of course, that we need no less (but also no more) than the words that the Lord has given to the reader; but it also means that the various arrangements and forms that the scripture takes are also inseparable from God’s purposes. If more could be said at this point, here we only underscore that there are many different parts and forms of scripture, and that each form is sufficient and essential to its purpose. Certainly, men remain unaware of God’s work by neglecting the scripture altogether, but others by refusing to read it as it is given. Ironically, zeal sometimes becomes bad medicine to faith, simply because it is not wedded to what is actually written. And too frequently preaching seeks to excite zeal apart from the objective meaning of scripture.

Of course, part of good hearing and reading means understanding the ways that words work together, so that their united purpose might be understood. That said, much of the art7Here, I am thinking of art as artifice, that which carries a design and intention. Much of what humans do demonstrates a design, in as much as their will stands behind their communications as expressions to reveal and obtain that will. Insofar as humans express themselves in this way, they exhibit that they are made in God’s image. However, in as much as they also possess a will in opposition to God’s will, they show themselves in idolatrous self-worship and rebellion to their creator. of speech is instinctively understood. We might better say that it is gifted to men, for (as many have helpfully reminded us) language is a basic faculty that nonetheless does not belong to the animals.8Obviously, this is a point that is debated and rejected by some, for they regard language and speech as biologically founded and eventually evolved. In such views, humans merely possess the advantages of their evolutionary development and not any unique gift by God’s design. Generally, this view reduces language to merely an advanced system of communication. Even so, whatever else is eventually learned about language is also acquired rather naturally. No one should think that extraordinary, rich uses of language necessarily requires formal, paid instruction. Obviously, a porch swing in Kentucky is as good a place as a classroom to learn the art of speech—and often with much better cadence. That said, neither should one think that this art can be altogether forfeited, not if scripture is to be read and preached properly. Forms matter precisely because words matter and are always pregnant with purpose.

In the formal study of literature, the various forms and types of writing are categorized and identified as genres. It would be a bad mistake to restrict scripture’s interpretation to the features of genre; that said, Christians sometimes make a contrasting error, failing to even recognize that different forms of writing exist in the Bible. More properly, many fail to give careful enough attention to how the various forms they do recognize feature and disclose meaning. These forms affect and effect our reading of scripture.

It is appropriate to consider where forms of language differ from one another in the Bible, and (consequently) how the Spirit has made those forms to serve his revelatory purposes. If these categories of distinction are sometimes hidden to some readers, the parables are a good place to discover them. Clearly, the parable is but one form of speech among others. It is one identifiable genre. If so, the fact of different forms can be admitted, and its relevance considered unto a faithful reading of scripture as it is. For instance, readers easily recognize the parable as different from, say, a Psalm, which represents a kind of poetry. In this easy distinction lays the opportunity to consider what different forms of language accomplish when the Spirit employs them in the objective record of scripture.

A Different Reflex to a Single Pain 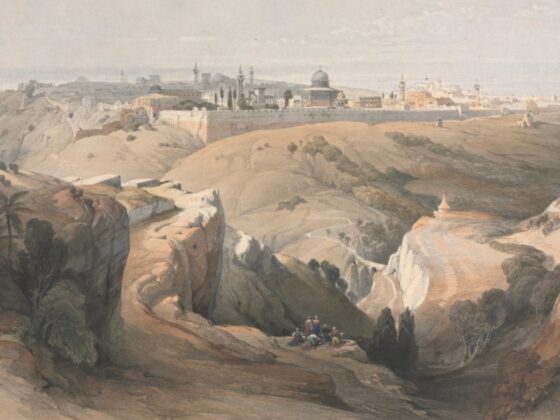 No Continuing City, but Continual Praise