When Jacob entered Egypt with his sons and their families, he did so according to the prophecy that was given Abraham (Genesis 15:12-16). Abraham’s seed, it had been said, would dwell and be afflicted in a land that was not their own (verse 13); but at this point, we also remember another part of that same prophecy: “And also that nation, whom they shall serve, will I judge: and afterward shall they come out with great substance” (verse 14). It is observed that the affliction could not prevent Israel’s deliverance from Egypt; in fact, the decedents of Jacob would depart Egypt in a far better situation than when Jacob first arrived.

That said, Egypt’s afflictions in Egypt assume a different character than mere difficulty. No situation in this world can be considered without taking account of the Fall, and the details given to us in this chapter mean that the Fall becomes the unavoidable factor when reading this portion of the Exodus narrative. Indeed, the very curses associated with Adam and Eve after the Fall become part of Israel’s bondage in Egypt, and we cannot read Exodus properly without this in mind.

If Israel’s deliverance from Egypt eventually forecasts Christ’s redemption of sinners, it should be of no surprise that Israel’s bondage is associated with the effects of Adam’s sin. In the end, the LORD made affliction to become a servant to Israel’s flourishing. This, in fact, predicts the gospel: The curse would not prevent God’s promise.

Exodus’ first chapter, then, describes Israel’s afflictions in two ways, each evoking Genesis’ third chapter. The first of these afflictions regarded Israel’s labor in Egypt, recalling the fact that the ground had been cursed for Adam’s sake, which then affected the nature of his work (Genesis 3:17-19). The Egyptians made the children of Israel to serve them with a kind of labor that the scripture calls rigor and bondage (Exodus 1:13-14). Importantly, this description regards something more than mere work: It is called a rigorous service. In this way, a distinction is apparent here that was impossible before the Fall, a distinction between work and toil.

Adam’s life in the garden had included work whereby he kept the garden of God. His vocation joined him unto the privilege of maintaining that place and order in which God first revealed himself to man, the garden of Eden. His work in the garden was without vanity or toil, though Adam was truly engaged in work. It is only after the Fall, then, that the idea of vocation is separated from occupation. Adam’s exclusion from the garden meant that mankind was also hindered in the purpose for which he was originally created and first employed. From that point onward, work took on the additional character of toil. Adam and his descendants, rather than work in the sphere of God’s revelation, began to toil in ground that God had cursed. It seems that Exodus chapter 1 merely confirms these facts.

Situated along the Nile, Egypt was a place of exceptional beauty (Genesis 13:10); and yet, it seems evident that Egypt’s significance in redemptive history is confirmed only when its natural beauty is considered in conjunction with its religious character and the associated toil of the Israelites. The Nile River and its attending beauty, recalling both Eden and the New Jerusalem, becomes the place where Pharaoh sets his throne and builds himself a city. In Egypt, symbols more properly belonging to the worship and the rule of God were reincorporated for idolatry. Accordingly, as the Exodus narrative begins, the children of Israel are growing in number but, nonetheless, occupied in a kind of religious task for which they were never called: they build and beautify the revelation of Pharaoh—the treasure cities that become known as Pithom and Raamses (1:11). This work not only possesses the character of affliction (1:11) and rigor (1:13), the people that God had chosen for himself are now enslaved and employed in the glorification of a king who had made himself a god. The contrasts with Eden, then, become both apparent and tragic.

But the curse upon Eve is also recalled in this first chapter, and not Adam’s only. When Pharaoh called the Hebrew midwives and tasked them with the murder of Jewish boys, Pharaoh’s persecution touches the Hebrew women at the very point of Eve’s curse: It had been said, “In sorrow thou shalt bring forth children” (Genesis 2:16).

It is also to be remembered that when God first made the Woman and brought her to Adam, Adam had named her, even as he had been given the privilege to name the many creatures in God’s creation (Genesis 2:21-25). Significantly, Adam first named Eve in relation to himself: He called her Woman, because she was taken out of the Man (Genesis 2:24). Nevertheless, after the Fall—even after Eve’s sin initiated her own death—Adam gives his wife another name altogether. He renamed her Eve, the mother of all living (Genesis 3:20).

This act, of course, had the function of prophecy, for it took account of the promise that God had given them both: Her seed (referring to Jesus Christ) would bruise the serpent’s head (Genesis 3:15). The Woman was, properly speaking, became the maternal ancestor of the Lord Jesus; and yet, it seems that something more is in view. Adam’s new name for her is, in fact, an announcement of honor: In the very point in which Eve would have felt the greatest shame, Adam invests her with distinction—a new name that takes account of the future, rather than the horrible past. Indeed, the past is not undone; and yet, all will be forgiven and made better than Eden through the seed of this woman. It therefore become likewise significant that Adam does not rename his wife in relation to himself, but in regard to the great privilege that God afterward and graciously granted her: The Woman had chosen death but God made her the mother of all living. Every time the name is used, the grace of the God is proclaimed.

Pharaoh, however, mocks the Hebrew women in Egypt, assigning the midwives the very task of murder. Pharaoh seeks their cooperation in foiling the very promise made to Eve. God had honored the woman in a way that he did not honor the man, but Pharaoh invites them to a new shame. Of course, the midwives refuse Pharaoh’s command, so that it is little surprise that God invests them with a kind of honor. The text then tells us that God, accordingly, gave them houses (1:21). There are a few different ways that this has been understood, but it seems that the context favors one interpretation above others: When the midwives feared God, God gave the Jewish people houses.

If this is so, it showcases the progress and blessing of the Hebrew people in Egypt, despite Pharaoh’s attempts to destroy them—and this proceeds upon the faithfulness of the midwives. This progress is evident in the text itself. Exodus 1:1 reads that the sons of Jacob entered Israel with their households; but by the end of the chapter, those twelve households are now many houses (verse 21), referring to the many households that flourish because of the midwives feared their God and saved the children from murder. More to the point, when chapter 2 begins, it begins with interest in one house in particular, the house of Levi (Exodus 2:1). This becomes the house1Many readers will already understand that the Bible regularly and consistently speaks of a people in their corporate relationship. The word “house” first appears in the Bible in references to Noah’s family members, not to any physical structure, which is the more common use today (Genesis 7:1).—the household—from which Moses will arise as a deliverer for his people. The point, it seems, is not that God gave the midwives houses of their own, but that the midwives become part of Israel’s improbable increase. The midwives become the noble descendants of Eve, but also forerunners to Mary, from whom the Savior will be born2The practice of midwifery is not conducive to family life, and in the past midwives were often single or older women, who were freer from other family obligations. It is not stated here in the text, but one might wonder, then, if the typology here does not extend further than is first evident. Perhaps these women—without occasion for families of their own—are kinds of barren women or virgin mothers, women through whom the miracle of life, nevertheless, proceeds. They are, in a sense, mothers without children of their own, but women who join the ranks of other key women in scripture, through whom God’s promises are accomplished. They differ in ways from such women as Sarah, Hannah, or Mary, but they all share in a part of the way that God’s redemptive work proceeded through them in unexpected ways. If so, this ministry is also analogous to the kingdom’s notion of some unmarried, who remain such for kingdom of heaven’s sake (Matthew 19:9; also, Isaiah 56:3-5).. They are the mothers of the living, for they guarded the very means by which deliverers would come—Moses and the Lord Jesus.

In the Exodus narrative, Adam’s history would be made to serve a greater prophecy. It is significant, then, that when Pharaoh afflicts the Israelites, those afflictions regard the very same curses that were placed upon Adam and Eve after the Fall—cursed labor in the field and sorrow in conception. Even as the Israelites begin to flourish in Egypt, these afflictions are brought to bear upon the Jewish people in Egypt. They challenge but, importantly, cannot overcome the promise given to Abraham. 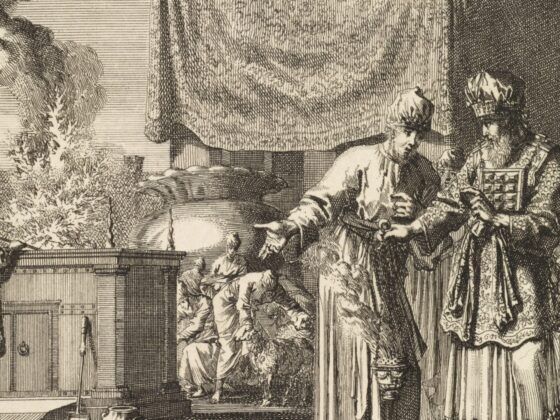 Privilege & Purpose in the Service of God